In their new book, Colin Coggins and Garrett Brown expand on the life lessons they teach in their popular and unorthodox business class. 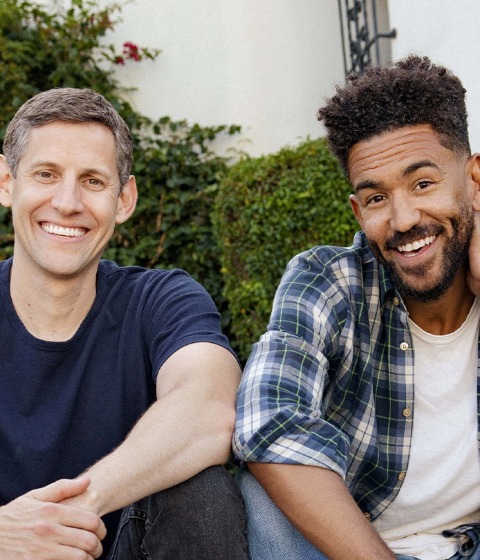 The salesman is an American icon, heralded in theater and film classics. Equally reviled and revered, most everyone has a stereotype in mind when they think of a salesperson.

COLIN COGGINS and GARRETT BROWN want you to forget all that. In their popular class, Sales Mindset for Entrepreneurs (BAEP 473), held Monday evenings to an overflow crowd, Coggins and Brown are on a mission to reframe the thinking about what selling is, and the very traits that lead to success.

“Everyone is selling something; their ideas, themselves, products, or services,” said Coggins. “Just because you don’t have the word ‘sales’ in your title doesn’t mean you’re not a salesperson. Successful people, no matter what they do, move people better than most.”

“That’s why the class is so important to us,” said Brown. “It’s not about what great sellers do, it’s about what they think. It’s a business class that nobody is teaching in business.”

Listening to Coggins and Brown talk about their outlook is a cross between a TED Talk on emotional intelligence and a good old-fashioned pep talk. They are, in fact, active on the speaker circuit for their sales mindset philosophy.

And now they have a book.

“We want to change the way the world thinks about salespeople by changing the way people think about themselves,” said Brown.

“The Unsold Mindset: Redefining What it Means to Sell,” will be released by HarperCollins Feb. 21 and is AVAILABLE FOR PREORDER ON AMAZON. In it, they’ve culled insights from some of the world’s most successful people (from top trial lawyers, CEOs, and entrepreneurs to Chef Roy Choi, Gen. Stanley McCrystal, and even Snoop Dogg!) to deconstruct the very notion of what it means to sell, and details how anyone can become successful in their field by thinking differently about selling.

“The best way to sell anything is to be your authentic self and be unsold on who you’re ‘supposed to’ be,” said Brown.

The book has enjoyed some early accolades, including nods from motivational gurus such as Adam Grant, Daniel Pink, and Robert Cialdini. It’s also been named a “must read” by the subscription book club, THE NEXT BIG IDEA CLUB.

Coggins and Brown ’02 met while working together as executives at an enterprise software startup in Santa Monica. After helping the company get acquired by Google, the two pursued other opportunities in high-level sales, entrepreneurship, and investing. Over this period they became not only business partners, but best friends.

They began sharing insights with others, consulting for companies and speaking to groups big and small. After a series of successful guest lectures, USC MARSHALL'S GREIF CENTER FOR ENTREPRENEURSHIP asked them to create and teach a class about a sales mindset for entrepreneurs that would upend everything students think they knew about sales.

“The best way to sell anything is to be your authentic self and be unsold on who you’re ‘supposed to’ be.”

It was an immediate hit.

“Professor Coggins and Brown’s class was one of my favorite classes at USC, and my only sales class,” said Claire Monroe ’20. “The lessons I learned have been instrumental in my career. This is a 100 percent must-take class for students.”

Of all their professional accomplishments, teaching the class is one of the things they are most proud of, they agree.

“The students benefit from our friendship,” said Coggins. “We couldn’t be more different, and yet we’ve come to the same conclusion through not shedding our authentic selves.” In fact, they say, some of their most popular lectures are ones where they debate on a topic. The class just began its ninth semester.

“We’re still practitioners, that’s the beauty of being an adjunct,” said Brown. “This class is our favorite two hours of the week.”

To celebrate the book’s release, the Greif Center is hosting a book launch party Feb. 22, from 6-8 p.m. at Traditions on the USC University Park Campus. It is open to students, alumni, and members of the USC community. Coggins and Brown will hold a conversation with former students about the many surprises of an unsold mindset.