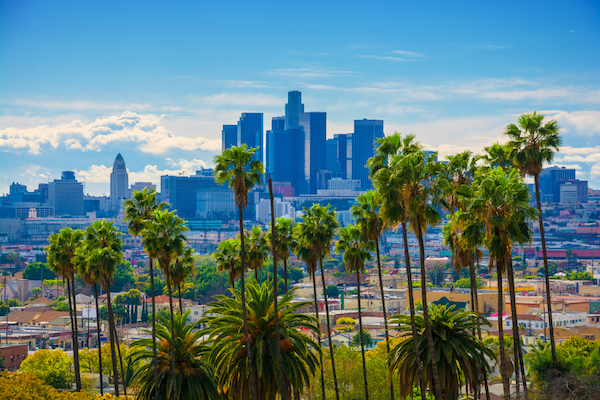 Regardless of how we feel about working from home with kids and partners day in and day out, few of us Angelenos miss our daily commutes.

But because there are fewer commuters now on the freeways, even those workers who must do their jobs on-site are benefitting from less congestion.

New research from the USC Marshall School of Business suggests that changes in working conditions brought on by the coronavirus pandemic shutdown will alter Los Angeles for the better.

“A lasting increase in working from home could have far-ranging consequences for the distribution of economic activity inside urban areas,” the researchers wrote.

The study, “How Do Cities Change When We Work from Home?” co-authored by Assistant Professor of Finance and Business Economics Andrii Parkhomenko (with Matt Delventhal and Eunjee Kwon—an economics Ph.D. candidate at USC), was recently accepted for publication in the Journal of Urban Economics.

“We wanted to examine the question of how the sudden transition to work from home will affect the city overall,” said Parkhomenko. “So we looked at Los Angeles specifically. And what we found was that the changes will positively impact the city on several levels if work from home remains common after the pandemic.”

Using a detailed quantitative model of internal city structure, the researchers found three major impacts: Jobs move to the core of the city while workers move to the periphery, traffic congestion eases and travel time drops, and average real estate prices drop with declines in core locations and increases on the periphery.

The findings are a win for both workers who can telecommute and those who can’t, noted the researchers:

“We found that workers who can switch to telecommuting on a permanent basis enjoy large personal gains by saving commute time and having the option of moving to more affordable neighborhoods,” said Parkhomenko. “And workers who must continue to work on-site enjoy modest personal gains because of less congested commute, improved access to good jobs, and a decline in average real estate prices.”

The researchers calibrated their findings to match residence and employment patterns from 2012-16, during which only 3.7 percent of workers were working remotely. They then calculated the effects of an increase in remote workers to various levels all the way to 33% and looked at the long-run results.

They found that an increasing share of telecommuters is decisive for the average price of real estate.

Workers who can telecommute move to less expensive locales, often on the periphery of the city core. Prices may rise in these locations, but they are more than offset by price decreases in the core. Prices for residential real estate in the core decline while there is reduced demand for on-site office space from workers. When 33 percent of workers telecommute, the study found that the average house price falls by nearly 6 percent.  Meanwhile, the income of landowners falls by 8 percent.

Parkhomenko stressed that the study is based on several assumptions.

“We modeled telecommuting as a fact imposed on workers who in the past were not allowed to work remotely,” said Parkhomenko. “We made the assumption that this makes workers happier because they do not have to endure the daily commute. In reality, some workers may dislike remote work. So if telecommuting were a choice in which workers balance the benefits against their individual dislikes, positive gains would almost surely be smaller than what we report.”