Not Your Ordinary Hot Sauce 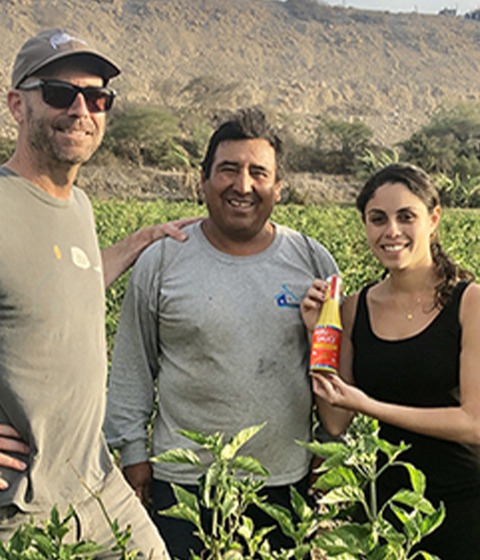 Growing up in Peru, Antoinette Muñoz eagerly anticipated at each Christmas dinner a slice of panetón. This cake, laden with dried fruits and orange zest, was an essential final course, but unaffordable for most people.

“I remember my dad buying panetón for kids in poorer neighborhoods—gifting cakes to whoever asked,” Muñoz said, still visibly moved by this childhood memory. “For me this was very special.”

An alumna of the USC Marshall School of Business Master of Science in Social Entrepreneurship program, Muñoz grew up with the value of helping her community as a fundamental guiding force. Early in her career, she worked as a buyer for a retailer in Peru. But as time went on, Muñoz, who was raised in Lima, felt compelled to create a business that reconnected her to her core values.

“In Peru, we have a big equality gap,” she said. “I wanted to create products aligned with a social cause.”

Sauce was a product Muñoz consumed daily. “It was one of the few things I always brought with me,” she said. The mixture, which she put on “nearly everything,” drew on traditional Peruvian flavors like garlic and rocotto (a pepper). But as Muñoz thought about building a business around it, she began to wonder: whom does such a product most benefit?

“I researched the whole process of making sauce, starting at the farmer all the way to the consumer,” she said. “The person who benefits least from it is the farmer.”

Muñoz turned to the MSSE program at USC Brittingham Social Enterprise Lab to help integrate her product into a full-fledged social enterprise. “I had a lot of experience in retail and buying, but I didn’t know much about social impact and business.”

“In Peru, we have a big equality gap, “I wanted to create products aligned with a social cause.”

For Muñoz, her first visit to USC was a detour, on her way home from a business trip to China. At USC, she met with David C. Bohnett Professor of Social Entrepreneurship Adlai Wertman. “Adlai asked me why I wanted to come here [USC] other than for the beautiful LA weather. When I told him about some of the causes moving me and my goals, he said, ‘Perfect, that’s the kind of people we want here. We want people who can make a change.’”

Once in the program, Muñoz worked on her business in every class. Many of her peers helped her by trying and critiquing her sauces and filling out focus group surveys along the way. Following graduation from the MSSE program, Munoz moved to San Clemente, California[FC1] to get to work on Peruana Sauce. To understand Muñoz’s vision better, it’s important to understand the core issues at play. The farmers are the ones who plant, fertilize and harvest the peppers put into the sauce. Typically, Muñoz said, the supply chain has worked such that a farmer might sell one pound of peppers for $1 to a a company, who then sells it for $4 to a distributor who then sells it for $7 to a supermarket which sells it to a consumer for $11 per pound.

“But the farmer is the one doing all of the work and they gain the least in this process,” Muñoz said.

To solve this issue, she first focused on directly purchasing peppers from farmers for a higher price. But while this allowed for greater profits, this didn’t vastly improve farmers’ quality of life. Further research led her to her true solution: irrigation. “I noticed the most expensive thing for farmers is water. They need a lot of water to nourish these kinds of plants, and whichever way they get it—from the city or from a nearby area—is very labor-intensive and expensive.”

Working directly with farmers, Muñoz committed to helping them put in place infrastructure that makes their work sustainable. Later this month, she will be traveling to Peru to help install an irrigation system for a local farm. With her business expanding—she reports ordering nearly twice as much sauce for her most recent shipment from Peru (48K up from 25K)—and a new US distributor, Muñoz plans to add a couple new flavors next year.

“I used to eat very bland,” she said. “But whenever I was cooking, I was adding sauce to everything. I want people to enjoy its flavor, and feel good about the product’s impact and origins. I know that once they try it, this will become their new everything sauce!"”

Peruana Sauce is a bold, flavorful sauce made with love from Peru. A social impact company that supports small scale Peruvian chili pepper farmers. Their goal is to support low-income rural farmers through the sales of Peruvian hot sauces, made from the same ají and rocoto chili peppers they have been harvesting for generations. Peruana Sauce is a Latin owned, female owned and run company operating out of San Clemente CA.